Six to appear with Palimpsest in fall 2015

Placed memoir with Freehand Books! to appear in fall 2014…

Looking back on last year, belatedly…

Meta-commentary with J. Ball on Starnino on bpNichol

Wednesday night March 2nd qualified as a big moment for me and my family, as I won the 2016 Kobzar Award for my memoir, Detachment. Many, many thanks are in order, including to all the people who put this incredible event and award together, especially Dr. Christine Turkewych, and to the jury, represented on Wednesday by Karen Connelly. The press release and some photos below, with more words to follow when I get a chance.

Presented every two years by the Shevchenko Foundation, the prize recognizes a Canadian writer who most effectively presents a Ukrainian Canadian theme through poetry, drama, fiction, non-fiction or young people’s literature. Shevchenko Foundation President Andrew Hladyshewsky also announced an additional $500 in prize money for the four nominees, who each received $1500, for a total of over $30,000 in prize money awarded this year. 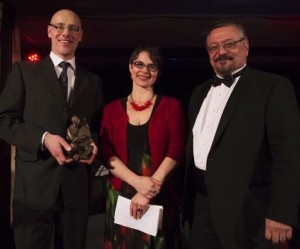 Also nominated for the 2016 award:

Orest T. Martynowych, The Showman and the Ukrainian Cause: Folk Dance, Film and the Life of Vasile Avramenko, University of Manitoba Press, 2014

Jury members Karen Connelly, Tamas Dobozy, and Shandi Mitchell said they were “inspired by the many literary works, histories, life stories, and documentaries that were entered for the prize and grateful for the insights they offered into a cultural and historical tradition that were not necessarily our own.”

Detachment: An Adoption Memoir recounts Mierau and his wife’s adoption of two young brothers from Ukraine in 2005. Dr. Christine Turkewych, Director of Literary Arts for the Shevchenko Foundation, commented, “Mierau’s narrative grips our hearts as we enter the complicated world of adoption in Ukraine and confronts the challenges of parenting children as they adapt to a new family in Canada.” Additionally, the book won the Alexander Kennedy Isbister Award for Non-Fiction and a 2015 Alberta Book Award. Maurice Mierau is also an editor and an award-winning poet.

About Kobzar Literary Award: Launched in 2003 by the Ukrainian Canadian Foundation of Taras Shevchenko, the biennial Kobzar Award recognizes outstanding contributions to Canadian literary arts through presentation of a Ukrainian Canadian theme with literary merit.